The Main types of Alps that people come across are the following:

The Alps SKCL/SKCM series is the most common found switches that are used on vintage and custom keyboards that use Alps switches.

The SKCL series refers Alps Linear switches that use a different top housing unlike SKCM series switches. These top housings have a hole for the LED would normally be placed.
Most common switches within the SKCL lineup are SKCL Green and SKCL Yellow. SKCL Cream is normally found as a spacebar in some keyboards but they can also be found throughout some keyboards manufactured by Alps.
These switches can feel tactile due to the way that the switch operates and the fact that there is a slight bend in the contacts. SKCL Cream doesn't have this issue as much as SKCL Green/Yellow due to the heavier weighting. 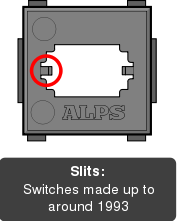 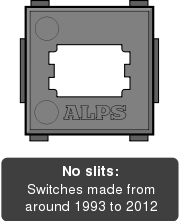 Bamboo
Pine switches have the slits where the slider interacts with the die of the housing. Pine top housings with the slits are smoother than Bamboo and don't bind as easily therefore, more sought after.

The SKBL/SKBM series of switches uses simplified contacts and contain less parts than SKCL/SKCM due to lack of parts that make up the switch plate.
The best way to think about the design of these switches Matias switches.

The price of Alps switches vary due to the condition of the switches and the type of switches.

The main factor when buying switches is the condition that the Alps switches you are buying are in. Most sellers will rate their switches out of 10 for condition. Now this varies from seller to seller so it's not the best way unless the seller has sold a good amount of Alps. YOu really never going to know how the feel until you buy them.
With Alps switches you want to look for the cleanest switches possible. If you can afford NOS(New Old Stock) Alps switches then go for them if you like the switches.

Alps switches lock into the plate with four tabs called butterfly wings these can break when they are desoldered from a keyboard. The more wings on a switch the better as it makes the switch more stable once they are put into a plate. I would try to make sure that all switches that have at least three butterfly wings when purchasing from a seller.

Opening Alps switches is easier in a plate because you are able to not have to hold the silder when opening the switch. The best tools to open Alps switches are plastic wedges that can be found on ebay for cheap instead of toothpicks because toothpicks breaks after a period of time.
Don't use any metal tools on the slider as it will scratch the slider and may ruin the feel of the switch.

Compressed air is your friend for the bootom housing of the switch as you want to stay away from ultrasonicing the contacts if possible. Reason being is that if water gets in the contacts it's a pain to take them apart and put them back together.

Lubing Alps switches is generally done with dry lube as the go to type of lube. The following are some of the most common types of dry lube that is used in the community:

The easiest way to assemble your switches is in the following order: